I first saw Sarah Jaffe perform at Sons of Hermann Hall with her former band Tomahawk Molly, who happened to be friends of ours. I instantly fell in love, bought their home-made CD, memorized all the words, and burned a copy for my sister. After we listened to Pretty and Pissed Off (our title, not hers) we wondered if she knew our mother. We then felt guilty about the illegal burn and made sure we paid her the five bucks the next time we saw her.
As she ventured out from Tomahawk Molly, I was reluctant to go along, because when we fall in love with someone or something, we like it to stay the same but that is usually impossible. But when the changing and growing is more like a blossoming and not like weird cocooning it is easier to go along. I was not disappointed.
Quite the contrary.
At the September 11th, sold-out Granada performance she, along with her band performed an exquisite set, where I felt like she had the most fun I’d ever seen her have on stage. She danced, she joked, and she was humbled by her sold-out, home-town crowd.
Standing at the very back of the room, my head leaning against the back wall, I remembered sending her a message once on Myspace (remember that?) asking her when the world was going to know about her? It seems she’s well on her way.
I flashbacked to a surprise party my husband threw for me on my 36th birthday. Even though the party was a blast , with so many of my  friends, this was probably one of the saddest times in my life. Sarah showed up with some of my friends and I’m sure she was strongly coerced to play, because she didn’t have a guitar and looked a bit mortified. Chris however was trying real hard to make up for some “junk” and he thought she might help.
He was right.I was impressed by the effort.
With my sister on one side, my daughter on the other, we sat by the fireplace and listened intently as she sang a few songs with our Jonny-cakes (Comrade) beside her.
At this time in my life, God was whispering softly to me about being a girl in this world and I was trying real hard to drown out the noise and hear Him.
Her songs reflected many of the feelings I was having to nth degree and yet they didn’t make me sadder. They reminded me I was not alone. That as hard and ugly as it gets, God can still make beauty out of me.
It goes down as one of my best memories.
I hope as Sarah is presented more opportunities to perform for larger audiences, play with other talented musicians, make music she loves, and sell a sell a zillion tunes, that ultimately, whether she is playing to a sold-out crowd in packed stadium or on the couch of a friend of a friend on a sad and awesome birthday, I hope she knows she is a beloved child of God in whom He delights. And that this fan is honored to delight right along with Him.
Now, you can be delighted, too.
Jonny Clark opens for Sarah tonight at The Mucky Duck, 2425 Norfolk, St in Houston. 7:30.
Posted by Unknown at 6:39 AM No comments:

Even though I taught middle school for ten years, I did not go into homeschooling with confidence. I know what kind of teacher I am, and it's not exactly pretty. 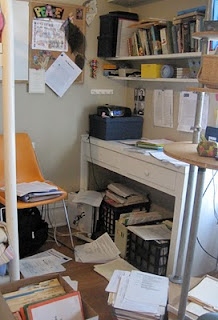 I don't mean messy, even though the picture does not lie. I mean, a little frantic, mostly last minute, great in the act and okay in the assessment  not so good in the follow up and wretched in the record keeping. I've always said, if I didn't have to write lesson plans or record grades, I'd be a good teacher. Well, there is also the issue of that little mean streak, but that's why I taught middle school.


But more often than that,  I am overruled by moments like these:


While working on an analogy that included the word avid, Chloe says, "I know that word
because Lupe Fiasco uses it in "Superstar":
"Everyone gets a nice autograph picture,
one for you and one for your sister,
who couldn't come tonight,
but is an avid listener."
Lupe is my favorite rapper.


Or a few minutes later while annotating a poem she begins describing a person who looks like an  "old  photograph, white washed or like she's sepia toned. "Then she remembers the photograph line is a reference to a description of Margo in Bradbury's All Summer in a Day.


Or Caleb writes a strongly worded poem about the burning of the Q'ran:
"I guess he would have the whole world blind and unable to chew," referring to Exodus 21:24.


Or, Chaz, continuing to write his life story, completely rejecting any writing assignments I give him, uses words or phrases he has picked up from Bible reading in the morning.  "I tell you the truth. This guy was huge."


Or Chris walks in with coffee back-up and and a Fuji apple singing Van Halen's "Hot for Teacher."


There aren't any principals asking for plans or  classes filled with mischievous, apathetic students, but still my own kids can be a hard crowd.


But the good list gets longer and longer, and I get less reluctant.

My dad gave me a turquoise Canon 10 MPL PowerShot for my birthday last year, for which I am very grateful. It is really best used for photos, but I've been convicted lately of "waiting" to do things until I have the "right" equipment. Which translates, procrastinating because what I want is too expensive. Which is  kind of like telling God, "I'll do what you want, when I get what I want."
I have never known that to be a good thing.
I decided to give it a shot and use the video recording option and my IMovie, um, ah, skills, before Adam Oas lays Final Cut in my lap and I commence to whining like a little brat.
I have a lot of footage from our trip to Washington I still need to edit, but I promised myself I would make something out of these snippets taken at our friend, Mike Turner's 60th birthday first. We had a blast listening to music, making and eating food, and watching little Sammy Brock show us how to let ourselves go. 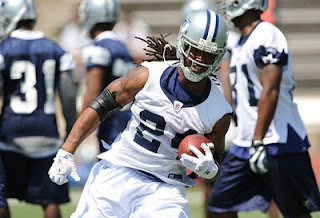 I don't want pulling of faces and monotone explanations. I want fire and brimstone. I want weeping and gnashing of teeth. I want sack cloth and ashes. I want some self-flagellation in the way of hard-core practice and some ascetic behavior in the way of not dating hot celebrities during the season.


But most importantly, I want RESULTS!


For my ulcer's sake and my mother's sanity, RISE UP and PLAY BALL, BOYS!
Posted by Unknown at 1:49 PM No comments:

I'd like to have all my ducks in a row, but

. . . that would require finding them. Or maybe I hate a particular duck and want it to be lost forever.
I have five draft blogs waiting to be published, some of them about our trip to Yakima and some about getting ready for our second year of home schooling and some about loading my pockets with rocks and walking four blocks to Lake Ray Hubbard and swimming with the fishies, but Chopin and Woolf have not prevailed in my tempestuous psyche.
I have five thank you notes to write, curriculum to create because I'm too bull-headed to just use someone else's, a film to finish, a viola teacher to find, a husband to rehearse music with, a Bible study to catch up on, a child to persuade that special olympics softball is just as good as baseball, a band poster to post, a resume to bedazzle and a budget to squeeze a little tighter since I put unleaded in my diesel engine a few weeks ago when I was deliriously ill, all while trying to convince a child, who shall not be named, NOT to buy a red hoodie with a yellow hammer and sickle on it AND hoping my ip address has not been linked to any terrorist plots to pants Glenn Beck. (I just said I didn't want to be linked to it, not that I didn't want it to happen:)
That being said, and just to be safe, I have taken to wearing pocket free pants so rocks don't find their way in and "the superman/banana" doesn't hurt as bad. However, this means I can never find my phone.
If I haven't called you back, don't assume you're a duck I hate; I've just been hard core web searching for pictures of a socialist rubber duckie to post, instead of attacking the aforementioned list.
What to do? Ah , yes . . .
Posted by Unknown at 7:57 AM No comments: